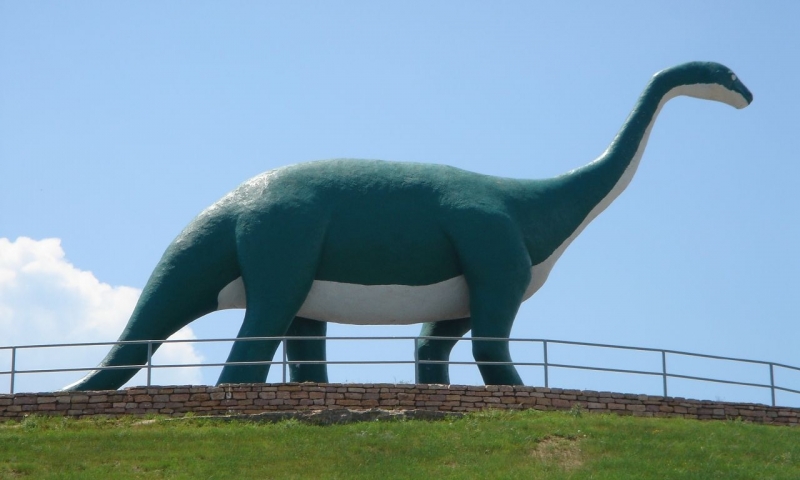 What can I see and do at the Dinosaur Park?

It's simply a city park ... but with dinosaurs. The kids will love exploring the trails that lead from life-size dinosaur to dinosaur. There is also a gift shop on-site, open during the summer.

Where is the Dinosaur Park?

Located at 940 Skyline Drive, a scenic road that divides east and west Rapid City on a ridge line.

Who can I call if I have questions?

The City of Rapid City Parks and Recreation department manages the park. They can be reached at (605) 394-4175.

History reigns strong in the Black Hills of South Dakota with the Rapid City Dinosaur Park.  For more than seventy-nine years, the park has provided people from across the state and world with insights into the lives and habitats of the prehistoric mammals that once roamed freely across the local landscape.

The Rapid City Dinosaur Park is as much about education as it is about fun.  Though the dinosaurs are as true to form as was envisioned in the 30’s, the concrete dinosaurs have a cartoonish air to them, making them equally as awe inspiring as they are amusing.  However, after generations of studies, the modern realistic outlook of dinosaur reconstructions is considerably different from these cartoon-like renditions.

Five of the Rapid City Dinosaur Park’s massive sculptures are classics in their own right, brought to the city during the Great Depression of the 20th century.  Locals and tourists alike have been flooding the park with their children, which is just a short distance from Mount Rushmore and other major Rapid City and area attractions.

The park was dedicated in 1936 with five dinosaurs constructed from iron type pipes and concrete.  These include the 80 foot by 28 foot Brontosaurus, which stands on the park’s highest ridge.  The Tyrannosaurus Rex, Stegosaurus, Triceratops and Apatosaurus stand nearby, lining the lower slopes and varied walkways.